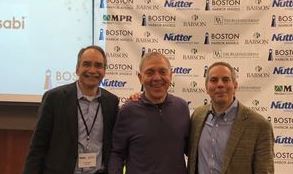 Wasabi Wins IT Startup of the Year

This past December, the Boston Harbor Angels hosted its annual end-of-year general meeting. During the meeting, Wasabi was honored as IT Startup of the Year. Wasabi is a new cloud storage company. After the awards, Mic Williams, President and Founder of Boston Harbor Angels, interviewed David Friend, CEO and co-founder of Wasabi. During the interview, Friend shared some history about his entrepreneurial journey, what tips he has for entrepreneurs and what makes him and other investors invest in startups.

Friend’s most well-known success, Carbonite, was not his first venture. Friend shared how he started his entrepreneurial journey by selling synthesizers to rock bands. The venture went through a few pivots before Friend sold the company. He eventually met Jeff Flowers, his future co-founder of Carbonite. Through personal experiences of photos disappearing, hard drives crashing and expensive recovery fees, Friend and Flowers realized that there had to be a better solution for people facing the fear of losing data. A simple solution. Giving people access to unlimited backup. Carbonite was born. Since inception, Carbonite has grown to be a global enterprise, protecting over 700 billion files and 60 billion recovered files.

As his success has given him much popularity amongst young founders, Friend is often approached by aspiring entrepreneurs. Friend shared an exercise that he tells these startups to go through when they seek advice. He suggests writing an ad for what your venture does. This process of writing an ad is really hard to do. However, it allows founders to hone in on what is important and what message they want to convey when reaching out to customers. Friend used Wasabi as an example. When the company was trying to come up with messaging, they wanted to come up with something clear and concise. Something simple. Wasabi’s website now shows one of their taglines: “Fast, affordable and we’ll never buy a supermarket.”

Towards the end of the interview, Friend gave his thoughts on what makes him invest in companies. Friend shared that many factors he takes into consideration are similar to what all investors are looking for. Friend said that he was “obsessed with simplicity.” It is simplicity that has helped him in his career. Simplicity relates to both the value offering but also how you convey what your venture does. Friend used the example of being in sales. Selling a product/service is hard; you have to get people’s attention and keep their attention so that they actually buy what you are selling. If it takes 15-20 minutes to get your point across to one customer, you will have a hard time convincing others. If you can not explain what you’re working on in 30 seconds, most investors will not be interested. Starting with a simple pitch is what can attract an investor’s attention. Friend also shared that he and other investors look at other factors, such as due diligence on team, analyzing the market opportunity, and whether the business has a creative solution.

The interview concluded with Friend reminding those in the audience that investors do not want to run out of money. The business planning process is key to the success of a startup. If you are an entrepreneur that is fundraising, have proof points and specific milestones that you want to accomplish. Make sure you can meet your goals.

3Derm Systems, Inc. (3Derm), a leader in the skin imaging and diagnostics industry, announced today that it has been…

Regroup Mass Notification, the award-winning leader in emergency and day-to-day mass communication technology, will be presenting an informative webinar…

Boston Harbor Angel members, Ziad Moukheiber and David Powsner, are the hosts of Failure – the Podcast, a podcast…

The Wearables Giving Computer Vision to the Blind

Other wearables use light and magnification to assist people with limited vision. A device called eSight, which users wear…

Cognoptix Announces Formation of a New Board of Directors

Student loan debt now totals $1.5 trillion, second only to mortgage debt, and it’s a crushing burden for many….

Regroup Mass Notification, the award-winning leader in emergency and day-to-day mass communication technology, today announced that it is joining…