From Startup to Publicly Traded Company: Story of Corbus Pharmaceuticals

From Startup to Publicly Traded Company: Story of Corbus Pharmaceuticals 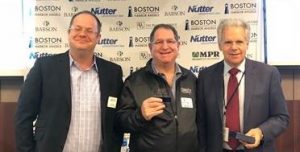 Corbus started in 2009 and like other companies in the life sciences field, the R&D process can take time. One of the reasons why Corbus has been so successful is because they were able to make the science work…and it did not stop there. One of the points that Cohen and Tepper shared was it was important to understand why their drugs have worked. An audience member asked if their science could be applied to different diseases, which led to the discussion of where do you focus? For any entrepreneur, it is tempting to go after the lowest hanging fruit. But how do you go there quickly? Efficiently? In a cost-effective way? For Corbus, although it may seem attractive to go after the large diseases, Cohen and Tepper shared that doing is expensive. They would need many studies with large amounts of people in each study. Once a drug is out on the market and you have consumers and customer, then you have more resources to go after the large diseases. What has helped Corbus get its success was focusing on a niche with an unmet need.

The people involved with Corbus have been critical to their success. Cohen and Tepper praised how their board of directors have been advocates for Corbus since the beginning. The two further shared that the team behind Corbus, the clinical and chemical teams, have been been vital in moving the business forward. Corbus is fortunate to have a diverse team with individuals that compliment each other. Although in a medical company having scientists is important, having people with business expertise is just as vital.

As a public company, Cohen said that Corbus has been quite successful. In 2016, the share price went from $1-10. That type of momentum can attract shareholders that have different expectations. There are of course the fans and advocates, but there are also individuals who have doubt in the company. The benefit of having critics is that they bring a different perspective and forces the team to look at the company different. This mentality brings a well-rounded view and allows fore more objective decision making.

Hearing from a venture that started small and now has going public on NASDAQ was inspiring. If you are an entrepreneur, remember, regardless of industry, you need to provide value to customers. Go after the market that you can access and has an unmet need. Find a team that can help get you there.

Bettina Hein is stepping down as CEO of Pixability, the Boston-based video advertising software company she founded a decade…

Life-changing glasses give sight to the blind

In the past, people diagnosed as “legally blind” could only learn how to adapt to their new reality. Now,…

Mary Sedgwick, who says she has been legally blind since 2003 due to bilateral optic neuritis, recently got the…

Michael Bayer, CFO of Wasabi Technologies, asked this rhetorical question in response to CFO’s inquiry about the business outlook…

…Laurel Taylor knew the problem firsthand. She is a former Google employee in Cambridge with a stellar credit score…

Laurel Taylor, founder and CEO of FutureFuel.io, knows firsthand the opportunities and struggles that come with taking on large…

STAR Trek-style smart glasses giving sight to the legally blind are coming to Adelaide, and today, Maureen Montes of…

Courtney Crawford tells 9News the fundraiser at Sombrero’s raised $350 for Kidd’s Kids.
A Livingston Parish woman, who is legally…